It Started With a Dance

When Bob asked 16 year-old Ineke to dance at a social ball, neither of them realised that nearly fifty years later, they would still be dancing together at their children’s, and their grandchildren’s, parties.

Bob was 24. He and his friends would finish footy practice, put on their best suits, sneak a bit of alcohol in their Coca-Cola bottles, and go to the social dance nights in the hope of “meeting people”, or rather, meeting girls. Ineke and her friends would do the same, putting on long dresses and gloves. “That’s what young people used to do for fun,” Ineke says, “Everyone would just dance. There was no alcohol, unless you snuck it in like Bob.”

They danced all night, and Bob was the cause of Ineke missing the last bus home, which meant he could give her a lift. “I saw this little blonde,” he says. “And I thought, ‘I’ll ask her to dance’. From then on it was like BOM! It was on. That was it.”

It wasn’t long after that the two decided to marry, and a month after the proposal they tied the knot. “Everyone thought we were pregnant or something, which we weren’t, we just wanted to get married!” Ineke says.

When asked what the wedding was like, they weren’t quite sure how to put it:

Ineke had to become Catholic to marry Bob. A priest came to the house the morning of the wedding so that she could confess her sins. The whole things upset Ineke’s parents, but to them the process meant very little. “We weren’t Christians so it didn’t really mean anything. We just wanted to get married”, Ineke shares. Little did they know that later down the track, becoming Christians would completely reshape their marriage.

They describe the early years of their marriage as being the most difficult. Being young and immature was one of the biggest obstacles, along with the life that came with running a pub. “Because we spent a lot of our early years in the pub, it meant we were always around alcohol, which made everything more difficult,” Ineke shares. “It also meant that we often misunderstood each other. One of the most important things in a marriage is to listen to each other and talk to each other. That was our biggest problem, so much goes misunderstood when you miss those steps.”

Twenty two years into their marriage Ineke and Bob became Christians and they describe it as a turning point in their relationship. “From that point on we became incredibly close,” says Bob. Ineke says she came to know the Lord reading a verse in the Bible, and asked Bob to go to church with her. When Bob listened to a pastor talking about unconditional love at the local Baptist Church, he gave his life to God that same day. Not long after, their three teenage children also became Christians, and it marked the beginning of a new depth to Bob and Ineke’s relationship which has remained strong ever since.

When asked what some of the most monumental moments in their marriage have been, they both agreed that the births of their three children were absolute highlights. They also talked about travelling overseas together, and both being able to reconnect with their heritage, the places they were born and spent their early childhoods. For Ineke it was Amsterdam, in the Netherlands. “It was a huge thing,” says Ineke. She was 10 years old when she came to Australia by boat, as was Bob when he left his hometown. For him that place was County Durham in the UK, where upon arrival things got very emotional. “He just cried,” Ineke recalls. Bob remembers life in England; “Things were pretty bad. There was no employment. My Father fixed up bombing sites. I had six sisters and they wanted big families to move to Australia. It cost ten pound to move the whole family, but it was a struggle to even get that ten pound together.” 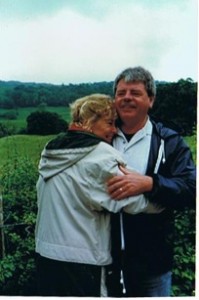 They are both incredibly grateful that they are able to call Australia home, and say that despite how amazing it was to reconnect with their heritage, the experience left them both even more appreciative of the life they had built together in Australia.

Today, Bob and Ineke’s favorite way to spend time together is to sit in their backyard with a glass of wine, feeding the birds. They describe their love for each other now as comfortable and relaxed. “Its the type of love where you can be at ease with that person all the time,” says Bob. “She is my heart’s home.”