This week we visit the United Kingdom and chat with Harrison Woods who is co-founder of YourParkingSpace which enables every day folks to rent out their parking space, driveway or lock-up garage to an audience of over 250,000 users each month.

Harrison has previously appeared in Dragons‘ Den on the BBC.
YourParkingSpace was featured in the Leap 100 list of most exciting, fast growing companies in the UK: http://www.cityam.com/leap-100.

Can you tell us a little about your business and what you do? 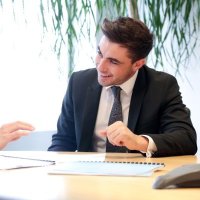 The users of YourParkingSpace are looking to search, book and park via our online platform. Its safer, cheaper and more convenient than just turning up at a car park on the day and we generate an incredible amount of extra revenue for space owners. As CEO and founder, I head up the commercial strategy, exploring areas of potential business growth and working with property companies to expand our inventory.

What motivated you to start your own business?

Being unable to work for anyone else! I got fired from my last three jobs, so I had a choice between being unemployed and starting my own business. I used to work at a recruitment startup with a peer-to-peer commercial model similar to YourParkingSpace, so I had relevant experience in an entrepreneurial environment.

What were some of the struggles you faced when you first started?

The mentality in the parking industry that new things can’t work. If nobody’s done it before, parking professionals are very hesitant to try it out. Its a very stagnant industry, where things are done because that’s the way they’ve always been done – its been difficult convincing people that something different can be better.

What are some of the most important lessons you have learnt in life?

Always break the rules. If you just do what everyone else says, you can’t get anywhere. Rules are arbitrary. They’re made by people to protect themselves and the industry they’re in, so you have to break them in order to innovate.

What do you like most about having your own business?

Being directly involved with change and innovation in an industry. If I didn’t have my own business, there’s no way I’d be able to have any influence on that.

What advice would you give to your younger self?

Who is an older person that you admire and why?

If you could jump into a time machine what era would you visit and why?

Yes – my favourite quote. “Success consists of going from failure to failure without loss of enthusiasm” – Winston Churchill.