Norma Teys was born in County Durham, England and shares what it was like growing up in Europe during the war.

“Living in London during the war as an only child, Mum and Dad would be at work so the only thing I could do after school was go by myself to the shelters and wait as the planes flew overhead. Because my Father was a builder I went to 11 schools in 10 years,” she says.

“When I was fifteen… we decided to leave London because Mum had a brother who lived up in Bowen in North Queensland and he just thought it would be a better life for me,” 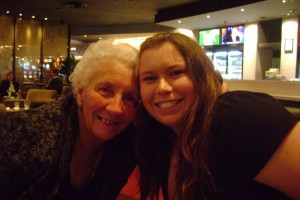 “I became an apprentice hairdresser because that was something I had dreamed of doing, I did that for 2 years before we moved from Bowen to Toowoomba,”

“In Toowoomba I finished my 3 year apprenticeship in hairdressing and by then I was old enough to do nursing which was what I really wanted to do. I did that for about three years and then I was married and had three beautiful daughters; Alison, Dianne and Karen,”

“Neale was a footballer; he played for many years before becoming a coach for Queensland and then eventually an Australian selector. Unfortunately, he developed a heart condition and couldn’t continue playing, so at the time we wished we had a son that he could pass his football onto,”

“When the girls grew up and started moving out it was sad, especially since I’d never had any siblings growing up. It was nice having a full house with them,”

“Then about six years ago after my husband passed away I moved down to the Gold Coast, the best part is that 2 of my daughters live down here with their families,”

“I like to keep busy. I’m in a group which go out on bus trips twice a week and then we have lunch and do activities or just go for a walk or a drive. I like it because it’s always something different, you get to socialise.”

Norma shares what she enjoys most about her life and offers her best advice for younger generations.

“It’s lovely as you get older to look back at your life; I only wish my husband was here because he loved his girls and he would have loved to watch the grandkids grow up and the great grandchildren arriving,”

“Enjoy what you have, it might not be exactly what you want but put your heart and soul into it and better things will always come along.”